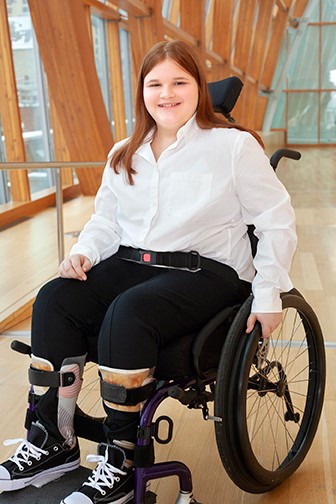 15 year-old Madisen’s medical condition is so rare that she is considered one-of-a-kind. Madisen has epilepsy and at age five was diagnosed with Osteogenesis Imperfecta, also know as ‘Brittle Bone Disease’, a condition that causes her bones to shatter from the slightest bump or pressure. Madisen believes she has broken pretty much every bone in her body.

Madisen’s mom Jodi describes her as “feisty and strong-willed” mainly because of the painful physical challenges she’s faced all her life. Those challenges have not slowed Madi down. She loves to swim and sing and has inspired other kids with disabilities to join her to form a choir. She even tried sit-skiing for the first time this year at We Care’s Winterfest event.

Madisen is looking forward to attending Easter Seals camp for the second time this summer. Her first experience was special: “It helped with independence and made me want to get out in the world and do things on my own”.

Madi wants to attend McMaster University and become a social worker or a child life specialist. Her reason: “I want to help kids who have gone through what I have and there’s always someone who’s struggled more than you. Who better to help than kids?”.